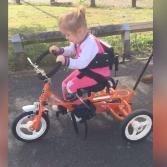 Only a few months after her birth, Orlaith’s family where told she had sever hypotonia (low muscle tone) which would significantly impact most areas of her body including feeding, toileting,speech & posture to name a few.

Although Orlaith has been working hard to increase her muscle strength to try and compensate for her low muscle tone her brain can confuse signals it sends and instead can create high tone in parts of her body, such as her legs, which have made achieving typical childhood milestones like crawling and walking more difficult to achieve – this is where support from ‘NICE’ has been invaluable.

NICE is a specialist Centre for Movement Disorders based in Birmingham who currently support over 300 disabled children and adults with neurological conditions.

The conductors at NICE work with Orlaith to help her body learn patters to make achieving movement and independent life skills more achievable and the progress Orliath has made whilst working with NICE has been enormous!

Orlaith’s family state that when she first started with NICE she struggled with head control and sitting however she has now achieved both skills and is working towards being able to stand and hopefully one day walk.

People with disabilities can frequently spend much of their time being assessed for what they can’t do, rather than the potential they have – But NICE is different; they take a “can do” approach.

We want to say THANK YOU and raise awareness of all the work NICE has done for Orlaith and all the other families.

On May 25th Ray McGee will be joining a team of 40 cyclists that are setting off from NICE HQ in Birmingham and cycling 120 miles, finishing on Westminster Bridge in London all in the aim of raising awareness and funding!

Help to support Orlaith’s brave recovery and aid the amazing support from NICE by following the link to Ray’s donation page below where all funds go directly to NICE.

Any donation helps both Orlaith and all the other children & adults that NICE are supporting through their recovery!